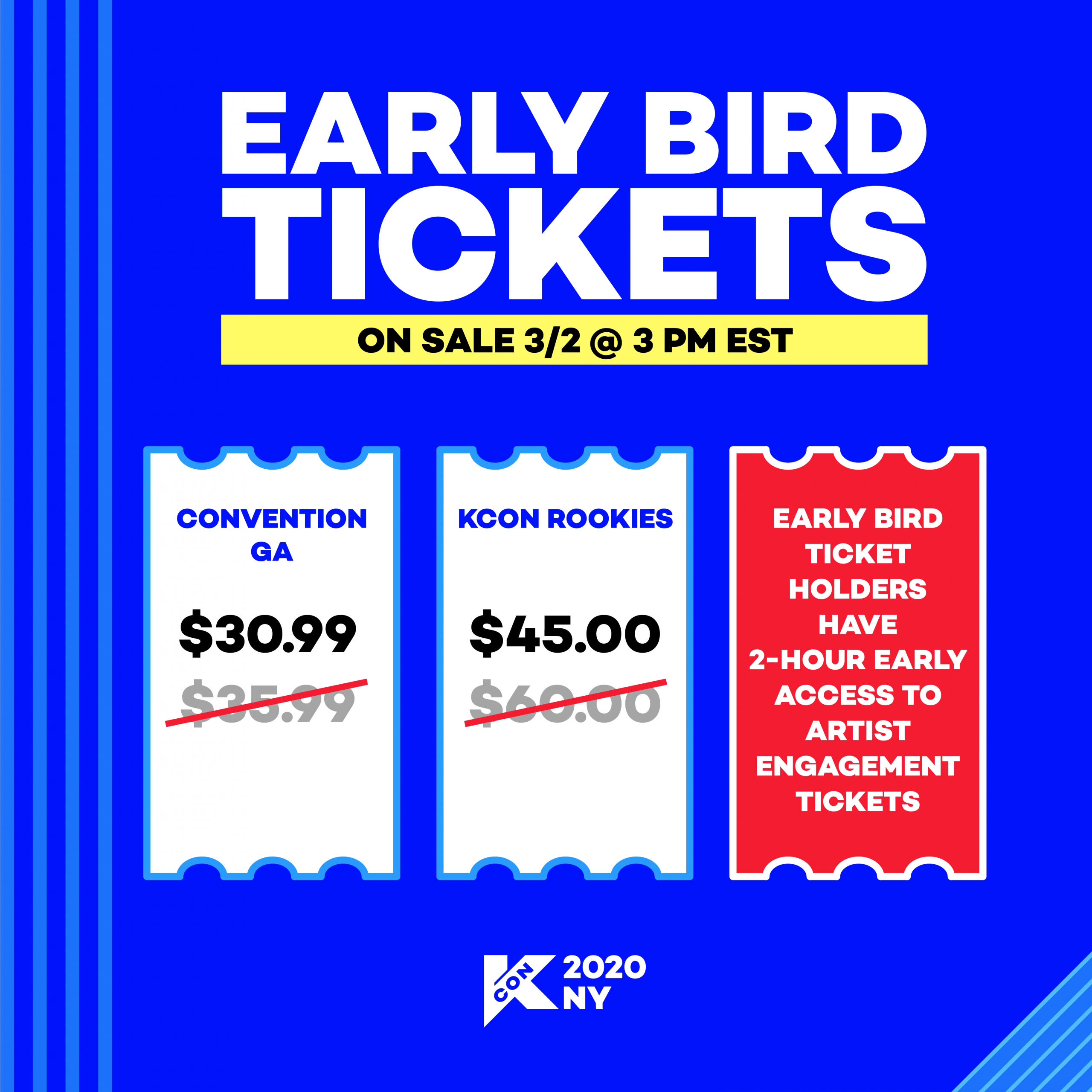 How To Get Early (and Discounted) Tickets to KCON!

For the first time ever, we’re announcing Early Bird tickets for KCON 2020 NY. Here’s what you need to know:

Besides the benefit of lower priced tickets, there’s actually two more perks. If you purchase Early Bird tickets, you will receive exclusive, 2-hour early access to get Artist Engagement Packages. Plus! If you purchase KCON ROOKIES tickets, you’ll have the chance to win signed albums.

There will be limited tickets available for KCON ROOKIES, so reserve your space early!

After the Early Bird access period ends on April 19, 2020 @11:59 p.m., the Convention GA and KCON ROOKIES tickets will return to their original rates.

If you’re a first-time KCON-er or you’re just new to some of the programs mentioned above, we’ll tell you everything you need to know below.

A Convention GA ticket grants (1) holder access to the KCON 2020 NY Convention from June 12 to June 14. This includes the KCON Expo, panels, workshops, KCON Stage, Star Live Talk, and all of the surprise idol appearances throughout the convention. Think of your Convention ticket as your pass to everything that happens within the Javits Center and you will need it to purchase convention add-ons like KCON ROOKIES and Artist Engagement.

The convention typically runs until around two hours before the official KCON concerts so no need to worry about overlap! Once we get closer to the event, an official schedule will be released.

If you’re new to KCON, check out the two videos below to see what you can expect at the Convention.

Artist Engagement is one of the original elements of KCON and one of the most sought-after KCON experiences. We invite our KCON lineup artists to the Artist Engagement stage to answer your questions, play games, and to even hi-touch fans. The goal is to give fans a rare chance to meet not only their favorite artists, but also artists who may not often visit to the U.S. We’ll be releasing more information about Artist Engagement soon, so stay tuned!

KCON ROOKIES is brand new for KCON 2020 NY, but you can think of it as a launchpad for new K-Pop artists. On the evening of June 12, we’ll invite our rookies to play games, perform, and take on challenges with one goal in mind–to bewitch you into the fandom.

Last year, KCON ROOKIES brought ATEEZ, LOONA, and AB6IX to stage their hit songs, show off their hidden talents, and even compete against each other in a game of competitive chapstick stacking. We’ll be releasing more information about who and what you can expect at KCON 2020 NY soon. To get a better idea of the KCON ROOKIES happenings, here’s what happened at KCON 2019 LA: